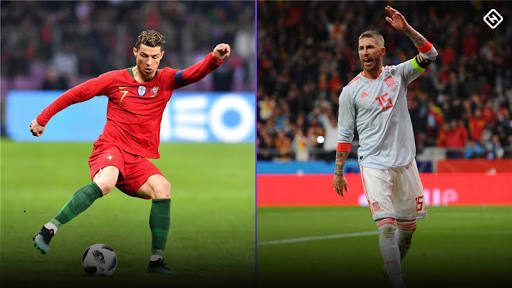 85min: Spain back to seeing the game out in their usual professional way. Lucas Vazquez replaces the excellent David Silva.

79min: De Gea bailed out from his bad decision to come out by a Quaresma handball. Andre Silva meanwhile replaces the fairly poor Goncalo Guedes for Portugal’s final change.

77min: Diego’s day is over after an hour and fifteen of goals, tackles, harassment, and all the usual thing a motivated Diego Costa is known for. Great game for the former Chelsea striker. Aspas replaces him.

54min: Moutinho gives away a lazy free kick in the center of the pitch. Spain work a lovely combination from it and Costa gets his second with an easy tap-in!

52min: Spain with all the possession. No real danger.

49min: Bruno Fernandes with the first shot of the second half. Harmlessly wide from range.

46min: Second half underway after a breathless first. No changes, Portugal lead 2-1 on a Cristiano Ronaldo brace.

40min: Midfield blows traded, with Spain controlling possession and Portugal looking to counter, as per plan A for both teams.